PC-Games Blast From The Past 1 – Metal Fatigue

Blast From The Past 1 – Metal Fatigue 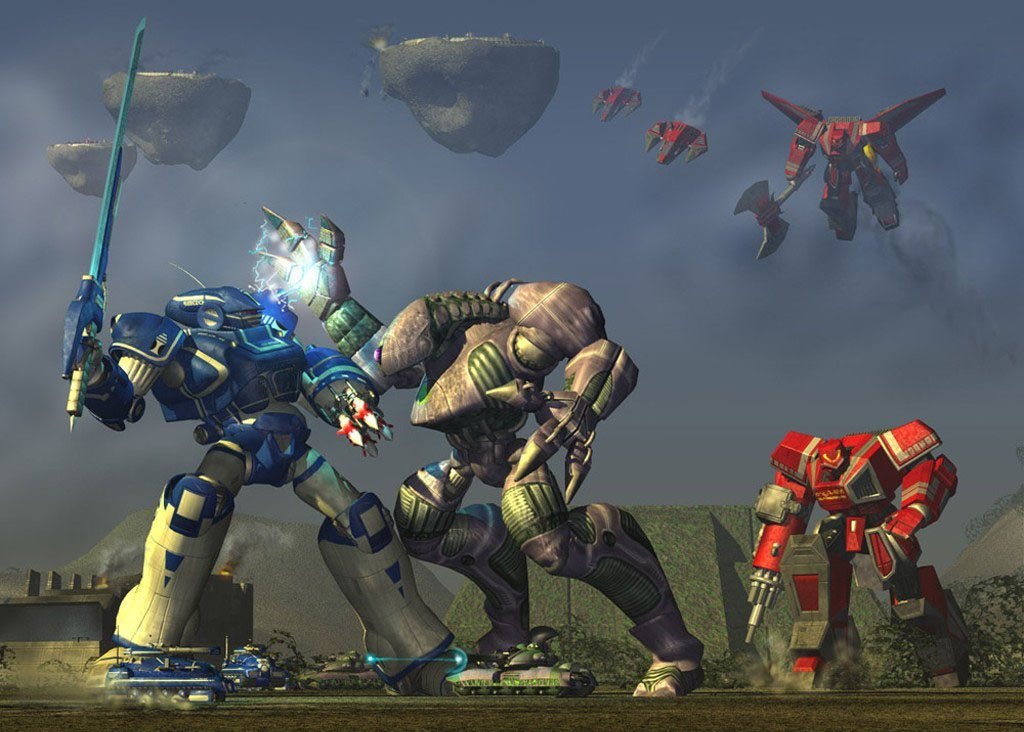 Is that giant robot holding a sword? Wait, is that one armed with an axe? And flying?
Yes. Yes it is!

What’s there not to love about giant robots fighting each other? Be it the iconic mechs from the BattleTech franchise, or the mechas from anime series like Gundam Wing or Neon Genesis Evangelion. There are a lot of mech-influenced games out there, some of the more recent examples include the addictive and fast-paced Hawken and the parkour-fragfest Titanfall. Most of these games are focused on the first-person aspect while the MechCommander series covered the simulation part and also incorporates a good bit of strategy and tactic gameplay. There hasn’t hoewever been much of a „real“ Mecha-RTS title on the market since 2000, when Psygnosis published a gem in the rough: Metal Fatigue.

On the outside Metal Fatigue is your classical „Command & Conquer“ style RTS: you’ve got buildings, a construction unit which also forages the resource you need to build more units and structures (called metaenergy), and a small selection of tanks, artillery, jet fighters and bombers. Those units also slightly differ in power and speed depending on which of the three factions you choose. These factions are called „Corponations“ and are essentially giant capitalistic conglomerates who have come to a remote star system in search of the origin of the alien technology which enabled them to build spaceships and giant walking robots in the first place.

Each corponation sports a unique look and feel. RimTech weapons focus on missiles and energy devices like laser swords, energy shields and EMP bursts. MilAgro weaponry is more brutish, sporting axes, hammers, gatling guns and howitzers. Neuropa has adapted the alien technology the most and uses a mix of speed, stealth/cloaking and long range energy weapons, perfect for hit and run tactics. 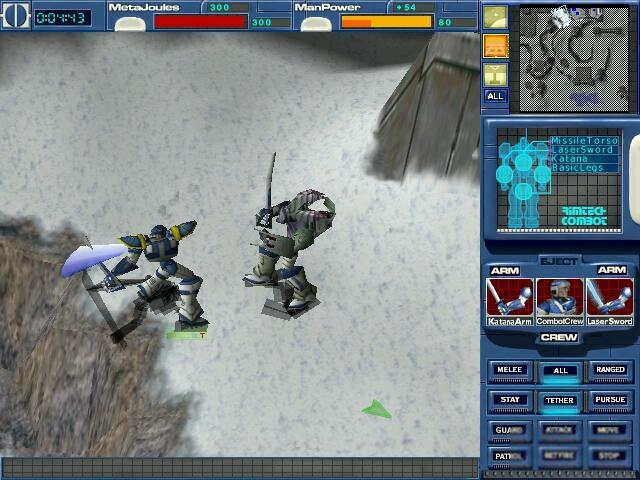 Speaking of weapons: what really sets Metal Fatigue apart are the giant robots which form the mainstay of your armed forces. These machines, called „Combots“ in the game, are modular and must be assembled out of a torso, a pair of legs and two arms. Furthermore they must be staffed with a crew, which will gain experience for surviving battles and increase the power of the Combot they control substantially. The individual Combot modules are unique for every Corponation and have a series of advantages and disadvantages. A MilAgro axe arm for instance is quite heavy, sporting good damage and a bonus to defense. The RimTech katana (the melee equivalent) is a bit lighter and does less damage, but has an increased chance to cut off limbs of an enemy combot.

And yes, you read that right. You can cut off enemy combot arms and literally dis-„arm“ them. You can even attach those limbs to your own combot right in the field – or haul them off to your base and reverse-engineer them so you can build your own version. In this way you can create combots for every situation: fast recon, stealth sniping, slow moving siege, flying assault, repair mechanic or any combination of those and more. Each corponation uses  about 8 different leg and torso types and 6 different arms, leading to a lot of different combinations. 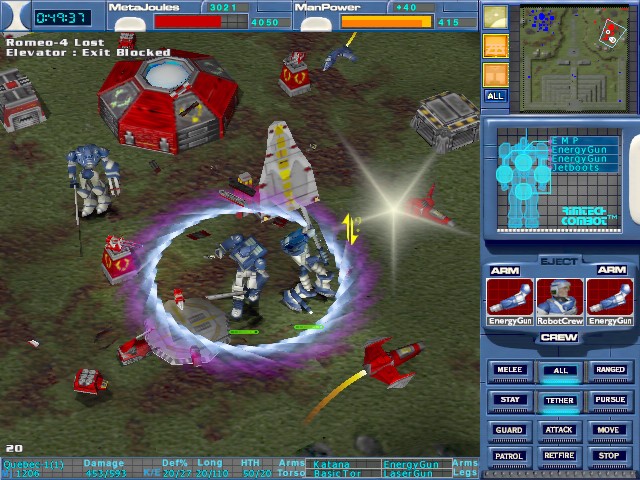 Another RimTech combot unleashes an EMP wave against MilAgro troops.

The game world is divided into three layers: underground, surface and orbit. The underground layer can only be accessed by vehicles, although you can build buildings here. You can also drill through the rock and create tunnels to perform surprise attacks behind the enemy lines. Lava pools are very abundant underground and can easily be farmed for more Metaenergy. The surface level is where most of the fighting takes place and where the bases are placed on starting a game. The orbit level consists of a few asteroids with metal surfaces on them so that you can erect structures; it can only be accessed by flying units or ground units using a teleport pad. You can build solar collectors on those asteroids which yield a lot more energy than on the surface level. Similar to the underground, the orbit level can be used for surprise attacks by dropping combots or flying units down behind enemy lines, as flying units can traverse between the orbital and surface layer at will. 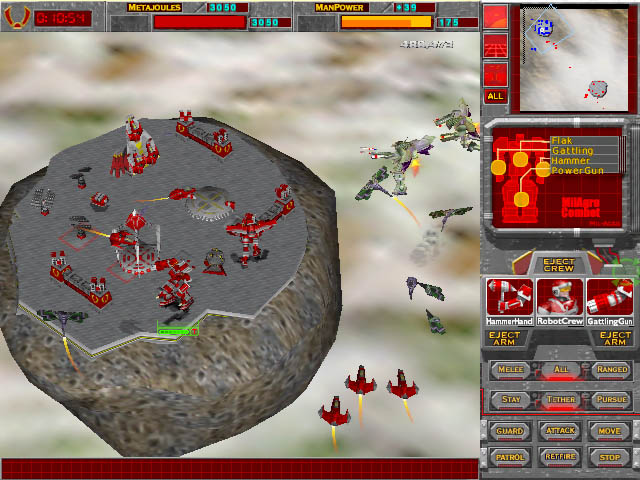 This MilAgro orbital base is under fire by Neuropa combots and a few fighters.

All this creates a very intense atmosphere which makes the game a hell lot of fun to play. You always have to be on your toes and turtling isn’t really an option due to the three layers. And the joy of seeing the carefully animated combat and death sequences when combots fight each other can not be overestimated.

THE GOOD
– great and fresh ideas which yet have to be replicated in modern RTS titles in this way
– Mechas. Combots. Whatever you call ’em: giant robots! Fighting!
– the animation is surprisingly good for a title this old
– the graphics are of course blocky but they have aged well enough for them not to be an eyesore
– the music is catchy and fits the game’s premise and combat very well
– MECHAS. IN SPACE.

THE BAD
– since the game has never been properly patched, saving frequently is required unless you want to lose your progress to a crash

THE UGLY
– finding a copy of this game and getting it to work under Windows 7 can be very painful (it’s not listed with GOG.com but you can still buy many copies on eBay)

Blastscale score: 7/10 (due to the poor availability nowadays)